Federal Bank, a leading private sector bank in India, has announced that it has partnered with Ripple with the intention of implementing the latter’s technology to improve its cross-border payment services.

The Bombay Stock Exchange (BSE) release notes how the bank wishes to use the technology to accelerate cross-border remittances, 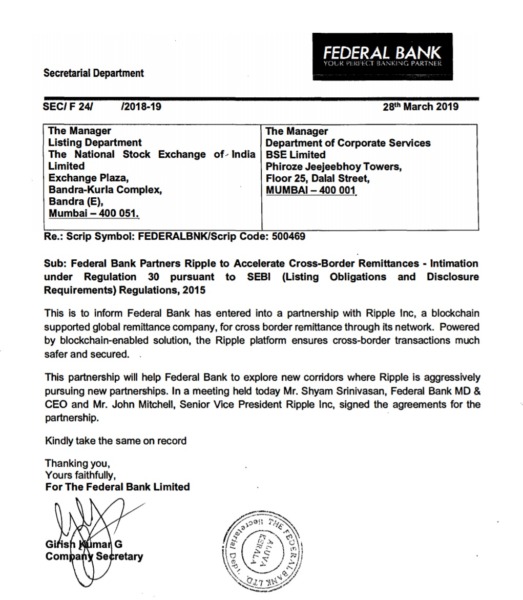 Federal Bank has a loyal customer base of roughly 8 million. The bank has also previously worked on blockchain solutions for remittances, as mentioned in their 2017-2018 annual report (pg. 26).

Shortly after the news broke, shares of Federal Bank rose by 2%.

Ripple has broken into markets all over the world, having nabbed partners in Asia, Africa, the Americas, Europe, and the Middle East. RippleNet, which is Ripple’s network of financial institutions making use of its technology, now surpasses 200 partners.

Ripple’s aggressive growth is perhaps what has SBI Holdings CEO Yoshitaka Kitao so enthused by the project, with him having said that many banks in Japan will use XRP by 2025. Several banks have already made transfers using Ripple’s technology, and Mercury FX, a London-based international payments firm, says that $1.8 billion worth of remittances have been executed through Ripple.