Ripple keeps proving to be a solid company with much to contribute to the benefit of the ecosystem. The startup behind the development of XRP has slowly succeeded in getting the community interested not only in the technology behind the token but also in other solutions offered by the company.

This successful campaign allowed Ripple to make a name for itself in the international technology landscape, and yesterday, the San Francisco-based company was honored to be considered as the architect of one of the ideas that could change the world.

Fast Company has been organizing the World Changing Ideas Awards for three years as a way of paying tribute to those initiatives that because of their impact, innovation or way of implementation have the possibility of causing a positive impact in the world.
According to information provided by Fast Company, more than 2000 participants submitted their projects to be studied and considered by the panel of judges as worthy of one of the awards available.

The panel of experts gave Ripple an honorable mention in the field of “Developing-World Technology. Specifically, it was the xRapid tech what made it possible for Ripple to obtain such recognition. The company shared the mention along with other startups such as Mindtree.org, Accenture Labs India, Ericsson, and Vivo.

Ripple shared the information with his followers, mentioning that it was an honor for the entire team of workers. The XRP Army quickly spread the tweet and so far has 789 Retweets and more than 1800 likes.

xRapid, xVia and xCurrent: The three main solutions developed by Ripple
xRapid is a relatively new technology. Ripple officially launched the product a few months ago. Since then, several banks and financial institutions have adopted the technology to facilitate international trade and payments. XRP currently has bullish behavior, standing at 0.35276 USD per token.

Despite the hype that this news could have triggered, the token behaves relatively normal. Notwithstanding the general market trend, the value of XRP with respect to BTC has been in a constant decline, however, when compared to the XRP/USD pair is clear that XRP is bullish and is only seen with a downward trend because the Bitcoin has had much higher growth. 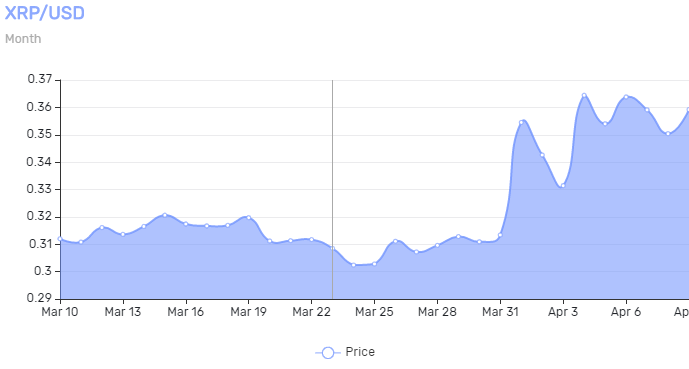